PLAINVIEW, NY (April 19, 2022) — Four races into the 2022 NHRA Camping World Drag Racing Series season has already shown that Justin Ashley and the Phillips Connect/Toyota Top Fuel dragster powered by Vita C Shot team are squarely in the middle of one of the toughest seasons in the category’s history. Each race has not only featured a different winner but in all four cases the final round was composed completely of first time 2022 finalists. All in all, ten different Top Fuel racers have had a shot victory already this season. 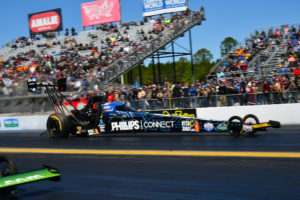 Ashley was the first to hoist a trophy taking home his first Winternationals title at the season-opening national event. The win came at the first race of an early relationship with new primary sponsor Phillips Connect. A semifinal finish at the Gatornationals solidified the deal for the remainder of the season. The sponsorship is more than logos on an 11,000-horsepower race car as Ashley has spent time with Phillips Connect employees and joined the company’s involvement in supporting Ukrainian families and refugees. At the Las Vegas Four-Wide Nationals Ashley and his team raised over $30,000 for relief funds with donors’ names added to the front wing of his Top Fuel dragster. The initiative is continuing this weekend for the NHRA SpringNationals in Houston.

While this is being billed as the final NHRA national event at historic Houston Raceway Park Ashley is focusing on building on his team’s success and leaving his mark on Texas fans. The third-year pro would also like to keep his round win streak in Texas intact with another four win lights on Sunday.

“The Houston fans are always very passionate about their racing,” said Ashley, who won the last NHRA national event held in Texas, the Fall Nationals at Texas Motorplex. “It’s a pleasure getting to interact with them throughout the race weekend. Now that it’s the last NHRA event at Houston Raceway, that interaction and this race as whole becomes that much more significant. Our team has an opportunity to make history.”

It has been two weeks since Ashley strapped into his Phillips Connect Top Fuel dragster and the time off was both a positive and a negative.

“Ideally you would like to race on consecutive weekends all year long,” said Ashley. “As a driver it helps you stay focused and in a routine. But of course, some time off is healthy because of the opportunity to shift your focus, evaluate and separate yourself from the present moment.”

Between races Ashley is involved in real estate development in New York. He is also continuing to add corporate sponsors and maintain his current relationships with KATO Fastening Systems, Auto Shocker, Lucas Oil, and a host of other brands.

“Racing and real estate easily get intertwined when you’re in the midst of the season,” said Ashley. “That’s why when you step away from racing for a few weeks and focus more on the real estate business you have a different level of appreciation when you get back to the racetrack. I am looking forward to joining our team in Houston.”

Last year at the SpringNationals Ashley qualified No. 13 but managed an upset win in the first round before bowing out in the quarterfinals. That race was marred by persistent rain showers that only afforded each team one qualifying run before going right into eliminations. The same scenario played out earlier this season at the Gatornationals. Ashley raced to the semifinals for the second year in a row at the iconic event.

“I would love to have as many qualifying runs as possible to gather data and get comfortable behind the wheel before heading into raceday,” said Ashley. “But our Davis Motorsports crew chiefs Mike Green and Tommy DeLago are the best in the business. They have a ton of expertise and experience. This team is in a great position moving forward. The Top Fuel field is tough but everyone on our Phillips Connect/Vita C Shot team is up for the challenge.

Qualifying will begin for the final NHRA SpringNationals at 7 p.m. on Friday. There will be two qualifying sessions on Saturday with final eliminations beginning at 11 a.m. on Sunday.

About Justin Ashley Racing
Justin Ashley Racing in partnership with Davis Motorsports fields the Phillips Connect Toyota Top Fuel dragster powered by Vita C Shot in the NHRA Camping World Drag Racing Series. In 2021 Ashley raced to three final rounds with a win at the Texas Fall Nationals in Dallas and ultimately finished No. 4 in the Top Fuel standings. During his Top Fuel rookie season in 2020 Justin won the NHRA Summernationals, finished in the Top Ten and was recognized as the 2020 NHRA Rookie of the Year.  Prior to his professional debut Ashley has three wins in Top Alcohol Dragster on the Lucas Oil Series. He is the son of multi-time NHRA national event winner Mike Ashley. In 2017, he was named to the Drag Illustrated magazine’s 30 under 30 list, highlighting some of racing’s most promising young individuals on and off the racetrack. To learn more about Justin Ashley Racing, visit JustinAshley.com.