IRVINE, CA (May 10, 2022) – Phillips Connect and Justin Ashley Racing announce their partnership with the Wyakin Foundation, a nonprofit organization that connects wounded and injured veterans with the resources and opportunities to have a better future. The partnership will extend for the remaining 2022 NHRA Camping World Drag Racing season.

Phillips Industries is a longstanding supporter of the Wyakin Foundation, and connected Justin Ashley Racing with the nonprofit in January 2022. Since then, Ashley and his team have been dedicated to helping Wyakin, along with Phillips Connect, in its mission of preparing wounded veterans for fulfilling post-military careers.

“We are thrilled to partner with the Wyakin Foundation for the rest of the 2022 NHRA season,” said Phillips Connect’s CEO and Founder, Rob Phillips. “The Phillips family has always sought out philanthropies we resonate with, and Wyakin has been on the top of our list. The work that they do with the veterans in our community is so admirable, and we are proud to continue supporting them and their mission of making the transition for soldiers a bit easier.”

NHRA Top Fuel driver, Justin Ashley is excited to get involved with the Wyakin Foundation. “I first learned about the Wyakin Foundation this past January at the Phillips Connect HQ, and I instantly felt a connection with its mission. It’s an honor to partner with an organization so passionately dedicated to helping veterans within the community. Our team is very much looking forward to working closely with Wyakin throughout the 2022 season to help assist in successfully accomplishing their mission.”

Through its involvement with the NHRA, the Wyakin Foundation will be exposed to a multitude of fundraising opportunities. It will also encourage veteran participation by inviting them to the races to experience the sport firsthand.

“When presented with the opportunity to partner with Phillips Connect and Justin Ashley Racing, we instantly saw the fit,” said Wyakin Foundation’s Executive Director, Cory Rodriguez. “Our organization’s culture is built around the principles of hard work and commitment, and we see that with Justin Ashley and his team. We cannot wait to see what the 2022 season brings, and are excited to be front row, cheering on Justin.”

Since 2010, Wyakin has served as a conduit, connecting wounded and injured veterans to their successful and fulfilling civilian futures through education, development, and guidance. It treats each veteran as an individual, and formulates a plan for them based on their unique needs. The Wyakin Foundation creates strategies that help each veteran overcome his or her past and move toward a healthy and fulfilling future.

About Justin Ashley Racing
Justin Ashley Racing in partnership with Davis Motorsports fields the Phillips Connect Top Fuel dragster powered by Vita C Shot in the NHRA Camping World Drag Racing Series. In 2021 Ashley raced to three final rounds with a win at the Texas Fall Nationals in Dallas and ultimately finished No. 4 in the Top Fuel standings. During his Top Fuel rookie season in 2020 Justin won the NHRA Summernationals, finished in the Top Ten and was recognized as the 2020 NHRA Rookie of the Year.  Prior to his professional debut Ashley has three wins in Top Alcohol Dragster on the Lucas Oil Series. He is the son of multi-time NHRA national event winner Mike Ashley. In 2017, he was named to the Drag Illustrated magazine’s 30 under 30 list, highlighting some of racing’s most promising young individuals on and off the racetrack. To learn more about Justin Ashley Racing, visit JustinAshley.com.

Wyakin Foundation
The mission of the Wyakin Foundation is to serve as a conduit, connecting wounded and injured veterans to their successful and fulfilling civilian futures through education, development, and guidance.  They serve the men and women who have served us through expert professional and leadership development, strategic networking support, academic and career planning, and project management experiences designed to completely prepare participants for fulfilling post-military careers through the development of critical skill sets as well as a renewed sense of purpose and self-identity.

Trailer Telematics: Where to Start and Where it’s Going

Trailers have been historically low tech, but now many fleets want to take advantage of high-tech telematics capabilities to upgrade these assets to get more from them. Where to start? With the addition of Phillips Connect on the Geotab Marketplace, the company says Geotab customers can access a suite of solutions that help to maximize driver time through enhanced asset visibility and utilization. Phillips Connect to demo ChassisNet™ at the Marketwaves18 Conference

Phillips Connect will demonstrate ChassisNet™ as they strive to make the next cut to the Freight.Tech 25 list. 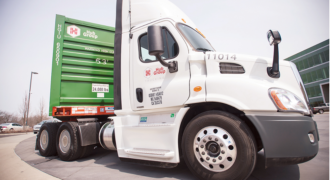 Internet of Things Arrives in Intermodal

The domestic intermodal industry has long been plagued by an inability to accurately track and report, the status of a container in transit. Historically, that’s put intermodal at a disadvantage compared with over-the-road trucking, in which GPS-enabled cargo and equipment-tracking sensors have been widely adopted for over-the-road trailers of all types. How smart cities will improve trucking and the supply chain